But take your time, think a lot,
Why, think of everything you've got.
For you will still be here tomorrow, but your dreams may not.


On this day, exactly one year ago, I stood by my father's hospital bed, held his hands and kissed his forehead as he breathed his last. He had been in hospital for close to a month after suffering a stroke, and I was with him for almost all of that time. Much has changed since that day. My family and I are now living in a new country, having moved from Bangkok to Singapore in the middle of last year and in that time, I have had a lot of time to come to grips with my father's death and also reflect on what I think I've learnt.

Never postpone your dreams.
We all say we'll get around to pursuing a hobby, or going on that vacation, when we 'have more time'. Don't. Because you never really know how much time you have. My father started life as a teacher and a journalist but put his writing aside when he joined the Government. I remember seeing a diary with scribbled notes for a novel in his cupboard many years ago, and when I began writing myself, I would ask him to finish it. He did get back to writing after his retirement, and went on to become a bestselling author. When we were chatting in hospital, he told me how proud and happy he was that I was pursuing my dream of being a writer. 'At least you didn't wait till you were 58', he said with a smile. Life can be short and unpredictable, but it can be beautiful if you live each day as fully as you can. So sign up for those lessons, book those tickets, or sit down in front of that keyboard. Whatever your dream, start living it a little bit every day.


The true meaning of being connected
It's said we live in a connected age today, and most people measure that by the number of Facebook friends and LinkedIn contacts. Yes, we are connected, but the most fundamental connection we form is with our loved ones through the memories and stories we create together. I have now lost both my parents, and the true meaning of being an orphan is that it is almost as if your childhood never existed, because there is now nobody there who can share memories and tales of that time with you. But then I see our old  photos, and I remember my parents in my dreams, and I realize that the warm, loving childhood they gave me formed such strong connections that even after they're gone, those connections live on. So forgive me if I don't post every few minutes on FB, or share my 140 character reactions to every game, TV show or news report. I'm using that time to create real connections with my family and friends.

The futility of holding grudges
My elder brother and my father had not spoken in years. When my father was in hospital, he told me his one regret was that he had not got around to reconciling with my brother. And now, they will never get that opportunity. I am nobody to sit in judgement over anyone, and I'm sure at that time, they were right in their own minds, but does it really matter? When faced with the finality of death, do our differences of opinion on things that seem important at that time really matter as much as we'd like to think? Would we really want to say or do the hurtful things we sometimes do if we knew that we would never get a chance to make up? I am not a saint, and at times I do get pissed off, but then I let it pass- life is too short, and too precious to hold grudges.


The true meaning of inheritance
I've been back to my father's old apartment in Delhi a couple of times over the last year, to get it cleaned up and to pick up some things. Both times, as I sat in that apartment my parents had made their home, I was struck by how it was now just an empty shell, bereft of any life or soul. I realized that people spend their lives accumulating bank balances, building bigger houses, buying bigger cars, but you take none of that with you. Also what you really leave behind are not those trinkets of material advancement, but the memories and values you instill in your children. So the only thing I've brought back from my father's apartment is an old set of toy soldiers he and my mother had got for me more than thirty years ago from a trip to London. We used to play with it together when I was a kid and it was perhaps my most prized possession as a child. My parents had kept it, together with some of my favourite cars, in a box and after all these years, my childhood was waiting for me, encapsulated in that old box and those old toys, and all the wonderful memories they brought back. I played with my own son, Aadi, with those same toys, and while my father wasn't there to see it, somewhere, somehow, I felt the circle of our lives was being completed. I am now myself a father, and the only real way I can do justice to my father's memory, the only real inheritance of his I have a right to, is to take all those memories and values he gave me, and use them to be the best possible father to my own son.

Baba, Cat Stevens called this one wrong. You are no longer here, but your dreams still are. 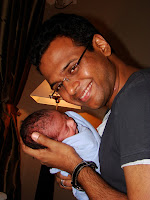 My father with me when I was less than a month old-and on the right, me with Aadi soon after his birth.
Posted by Unknown at 7:47 PM 2 comments:

LIVING NEXT DOOR TO THE KING

As a kid, two authors perhaps most influenced me in terms of committing to a writing career. The first was Tolkien, who inspired me with his ability to conjure up fantastic worlds, characters and epic adventures. The second was Stephen King. It was a quote by Stephen King that inspired me, as an eleven year old, to staple together my poems with Maths solutions and sell them to my classmates at fifty cents a pop. He had said something to the effect that the moment someone paid you anything to read what you had written, you were talented. That evening I came home with my first `royalty’ of $12.50 and announced to my mother that I had become a professional writer.

In later years, as someone who began to discover a love for writing horror, and as someone who enjoyed reading horror as a genre, I grew up in awe of the amazing body of work Stephen King had created.

In more ways than one, Stephen King was the one author who perhaps led me to be the writer I am today. So it was one of the highlights of my writing career so far to be on the same page as him- literally. Yesterday, I broke into the Top 10 bestselling Horror writers worldwide on Amazon, at #10, and had the amazing experience of being listed on the same page as Stephen King, an author I have admired ever since he first inspired and propelled my foray into writing. In a way, my journey as a writer had come full circle. Someone joked about me now taking on The King, but I have no pretensions of competing in the same weight class as him. Just being on the same page as him was a privilege- akin to someone who has grown up idolizing Sachin Tendulkar finding himself in the middle batting with the Master.

Stephen King will probably never read this and we will perhaps never meet in real life, but he should know that his words inspired a little kid thousands of miles away all those years ago, and led him to develop a life long love for writing. Today that kid is relishing meeting his inspiration, if only by being on the same page on an Amazon.com bestselling list. I can only hope and aspire that some day my work touches some kid’s life somewhere the way writers like Tolkien and King did mine.

Am now at #12, but find myself checking often whether I’m back, living next door to The King.

Posted by Unknown at 9:37 PM No comments:

Scribbles for your bookshelf

Learn more about my books

A family of scribblers...

My dad was a bestselling author, and his first book was published when he was 59. Cool! He passed away in May, 2012. Click to go to his blog and discover his remarkable legacy.